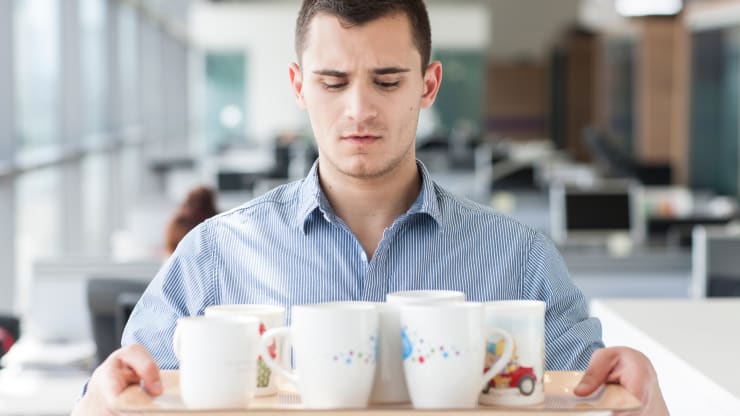 Experience has taught me that there are two types of people in the world:

In my first year as an an associate at PwC, it was customary (or so they told me) for the first years to do the coffee runs for the rest of the team. At the time, we happened to have coffee that resembled dirty dishwater spewing from the “coffee” machines, so coffee runs consisted of a walk to the shopping mall next door to buy coffee from one of my favourite coffee shops, Gloria Jeans. No problem, because the seniors on the job often funded these runs. Free coffee and a 30 minute break? Yes, please!

Because I typically work in large teams, this often resulted in a circus-worthy balancing act on the return trip with 8-12 cups of coffee stacked in 2-cup holders and the boss’ samoosas or other snacks wedged somewhere in between. The intense concentration and stress involved in this feat is somewhat amplified by the potentially disastrous consequences should I have forgotten or spilled anyone’s drink. You definitely didn’t want to piss off the quartet of subtly sinister seniors who you would have to see on a daily basis for the next month or two.

Despite the risk of impending doom, I found that I really enjoyed these coffee runs, not just because it usually meant a free cuppa (which, in the case of a coffee snob like me, will grant you eternal gratitude) and a 30-minute break from the monotony of all the ticking and bashing, but because arriving with a round of coffee lights up the room like nothing I have experienced before. It was amazing how delivering coffee that I didn’t even pay for could lift the moods of an entire team of people who had been slogging away at their desks in what can be an intensely stressful environment. It was the cue to stop what we were doing and take the chance to chat among ourselves, engage in a bit of banter, and amp ourselves up for Friday’s afternoon’s festivities. You could say that I personally delivered happiness! 😉

Jokes aside, these coffee runs often happened 2-3 times a day and I would go so far as to say that, despite audit work being extremely important, technical, valuable stuff and all that, that I brought more value to the team by fetching coffee and snacks than I did by doing the work that they assigned me. There will always be another workpaper to finish and another task to complete. These things just seem to happen faster when there are coffee and positivity around.

It’s been over 7 years since I was in my first year and, despite having significantly more on my plate during working hours,  I still try to make an effort to make/buy my teams – or random someones – a cuppa wherever I get the chance.

Despite my positive experience with being the coffee guy, where I view it as somewhat of a rite of passage, I have since discovered that many people don’t seem to share the same perspective!

Enter those who I like to call the Educated Elitists.

The thought had honestly never occurred to me that fetching coffee was beneath me, but here they were! The Educated Elitists arrive at the workplace with their postgrad diplomas and mightier-than-thou attitudes. Mutterings of “I didn’t study for 5 years for this shit” are audible as they begrudgingly saunter off for coffee runs – if they were able to be convinced in the first place. These are the poster-children for entitlement. They are the Anti-Coffee.

Imagine my shock when, as a senior, our new first years on the team flat-out refused coffee runs, even with the incentive of free coffee! Gasp! I had become accustomed to not even having to be asked for coffee runs. I would offer! (Admittedly, that may have been driven by my own coffee addiction)

It seems that with every new intake, the number of Educated Elitists increases. This entitled enemy is, if you ask me, the perfect example of what is wrong with our millennial generation. Why do we think we are too good to fetch coffee/run errands simply because “that’s not in the job description?”  When did it change that the employer now needs to appease the employee, and not the other way around?

A very smart man by the name of Thomas Monson quipped the following:

Ultimately, we all are able to choose whether we’re the coffee guy or the Educated Elitist. We can choose to embrace the seemingly menial tasks or we can roll our eyes and drag our heels when given something we think is not worthy of our endless list of qualifications.

Which have you decided to be?

I know which I’d rather employ.

Disclaimer: This post, despite its obvious infinite value and wisdom, is inspired mainly by my appreciation for coffee and the fact that I clearly haven’t had enough caffeine today. If you believe that coffee = happiness, you are more likely to have enjoyed the post and I would love to hear from you in the comments. If you don’t drink coffee…… I just… I can’t.

Follow me
Mark Atkinson
Editor & author at Trench Life
Mark spends his days at a big-four audit firm trying to help juniors navigate what can seem like a daunting environment, where you feel clueless on a day to day basis (i.e. The trench)
In his spare time, he enjoys writing, gaming and a beer or three.
Connect with him using the links above!

Follow me
Latest posts by Mark Atkinson (see all)

Mark spends his days at a big-four audit firm trying to help juniors navigate what can seem like a daunting environment, where you feel clueless on a day to day basis (i.e. The trench)
In his spare time, he enjoys writing, gaming and a beer or three.
Connect with him using the links above!

Want new posts sent to you?

Be a part of our community!

Our most loved posts

The Trench Life blog has been created for young professionals like you to help navigate the early stages of your career and keep you sane throughout!

We’ve got serious, we’ve got funny and we’ve got motivational. Take your pick and remember we’d love to hear your very own story from the trenches!

You can’t learn anything from a pop-up

But you can learn a whole lot from future posts on Trench Life, written for you by other young professionals. Don’t miss out on the best posts by letting us have your email so we can notify you of new content!